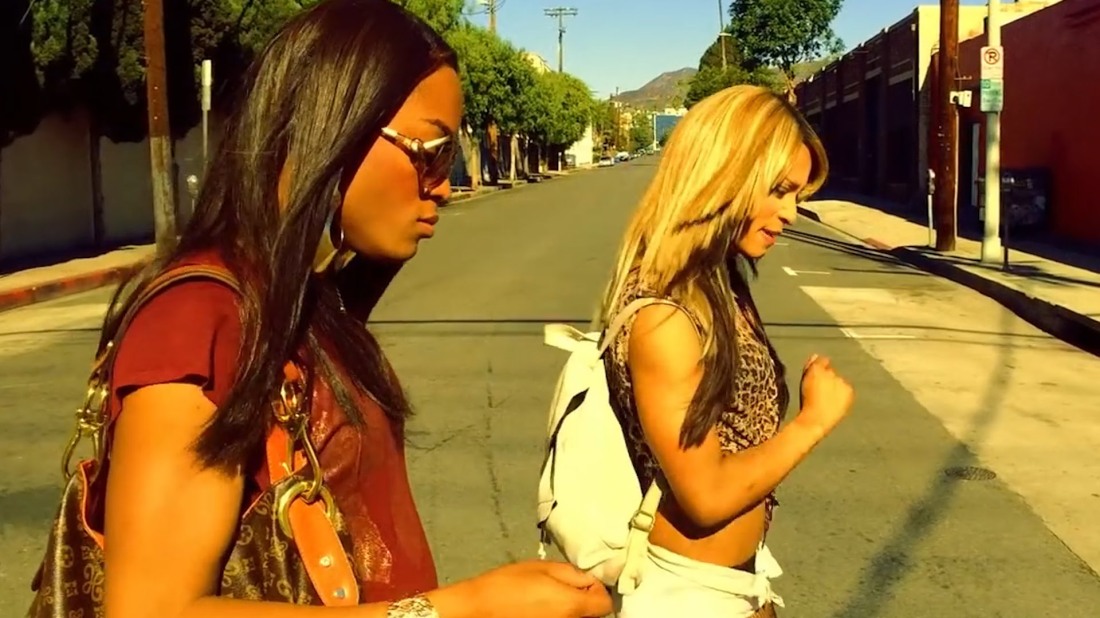 The film Tangerine explores the lives of two transgender friends living in Los Angeles, features transgender performers in the lead roles, and explores and celebrates their lives and struggles without ever being self-consciously a statement about transgender issues.

What I mean is that this film is a film about people.   And in the same way a similar movie might have been about two friends who happened to be straight, or two friends who happened to be doctors, or any two people who happened to be other things, this one explores the lives of two people who happen to be TG, but who are not limited by that aspect of their identities, and who are neither valorized or mocked because of it.  There is no sense that the audience has any obligation to pay special attention to the fact that they are TG, or to view the film like a movie in a sociology class where the subtext is, “This is how TG people put on their shoes!”   They are people like other people, and that is among the film’s triumphs.

And what do these people want?  The same things as everyone else: they want to be valued, loved, understood, and it is their pursuit of these universal human needs to drives the drama of the film and almost brought me to tears on several occasions.

Alexandra has planned a big concert and invited all of her friends as well as everyone else in the neighborhood.  She loves to sing and hopes for a special evening sharing her love with her friends, who have all enthusiastically promised to come see her.   When she gets to the venue, not even one person has shown up, and she stands outside arguing with the manager, insisting that people are on the way, refusing to believe that not even a single person cared enough to make it to the show.  I ached for her both because she had been abandoned, and because she refused to believe she had been abandoned.  I know that feeling.   When I was a kid, the last time my mother tried to throw a birthday party for me no one came.  No one.   And I could see the pain and shame she felt as much as I felt my own.  I didn’t even realize no one liked me until I was sitting there in our dirty little house, watching my mother calling neighbors and listening to their excuses.  I know that feeling and experience is shared by many people who are not “normal.”

Finally, one person does show up, Sin-Dee, who has brought along a woman she is kidnapping–  see the movie– and Alexandra performs for her friend and the other lonely people who spend their Christmas Eves at seedy bars.

Sin-Dee is the more temperamental of the two, and her quest on this Christmas Eve has been to find the woman who has been sleeping with her boyfriend and confront them.   During this confrontation, she learns that her boyfriend has cheated on her not only with the one girl, but also with her best friend, Alexandra, whose concert she alone cared enough to see.

The second betrayal breaks her heart.   She is devastated, and she wanders off into the night to turn some tricks, looking for some way to get out of herself, to stop feeling what she is feeling, only to have a car full of frat boys throw a bottle of piss in her face.

The movie does, in scenes like the one above, show some of the abusive behavior with a transgender person might face, some of the disgusting acts that happen.  These women are as far from Kaitlin Jenner and the Victoria’s Secret fashion show as you can get, and their lives are full of hardships, not magazine covers celebrating them for their courage.

So, when Sin-Dee is horrified, despairing, broken, who comes to the rescue?  Alexandra.   She comes over and helps her friend, and the two of them at least have each other.  They are not along on Christmas Eve, and they are not defeated.   They each seem determined to keep on living, to get up and make it another day.

There is a third character searching for connection in the movie, an Armenian cab driver.  He is married and has a child, and he loves men, and particularly Sin-Dee.   The last we see of him he is alone in his living room, standing in front of a Christmas tree, with a lost and lonely look on his face as he faces maintaining his marriage, keeping up his obligations, continuing to live in the closet.  How much worse to be alone in the presence of others?  To be a stranger to yourself?

The film could, I suppose, be accused of typing transgender characters in the sense that they are sex workers.  One of the criticism of the portrayal of TG people in the past is that they tend to be criminals or prostitutes, drug addicts.

But, see the movie. It doesn’t have that feel of otherness about it.  In fact, it brings attentions to harsh realities:

Ms. Taylor (Alexandra) now finds herself in a position similar to Ms. Cox, (Orange is the New Black) as a spokeswoman for transgender people, appreciative of the increased visibility yet dismayed at the soaring rates of homicide, suicide attempts and unemployment that plague this world. “Visibility is very important, but it’s not changing the day-to-day lives of everyday trans people,” Ms. Cox said. “We need another culture shift.”