I should love The Skin I Live In, the Pedro Almodovar film featuring forced femme and role-reversal themes right off the pages of Fictionmania.  I’ve spent hundreds of hours reading and enjoying stories like it, often somewhat poorly written stories just like it, which I enjoyed anyway due to the themes, and when I first heard about it I became as excited as I’ve been about anything since the first Lord of the Rings.

Here was a film by one of the great directors of my lifetime, a director who had explored gender themes throughout his career, and he was making a film out of the French noir classic Mygale. How could I not love it?

And then it came out. And I didn’t.

The movie is full of great performances, and is very well-constructed, but in the end it just didn’t quite do it for me, and I recently watched the DVD to try and figure out why.

Now, the actress chosen to play the lead character after his forced sex-change is exquisite.  Here are the before and after shots:

In addition to have a very feminine beauty, and it has always been interesting to me to think about what would happen to a straight male’s mind if he found himself pretty, but the actress also has a very small, feminine voice, very much the “little girl voice” often assigned to characters in forced femme stories, so he finds himself not only with a very pretty face, but an extremely feminine voice.

The character, renamed Vera after the sex change, is subtly placed in the context of a storybook damsel in distress, a beautiful female who is trapped in the surgeon (mad wizard’s) tower and subjected constantly to his watchful gaze via cameras in his room.  This connection is driven home as we see the character sitting in poses which are then echoed in classic paintings of female nudes that hand in the surgeon’s palatial home.

Vera even starts to dress and act feminine, wearing flowery dresses and putting on make-up as he seduces and then becomes the lover of the man who turned him into a woman:

Now, one of the first disappointments for me comes with how much is not in the movie in terms of seeing the character struggle with the change.   I have always found the struggle the most interesting part of these stories– how the guy deals with his new body and face, what pressures and incidents could lead him to accept a new life and even go so far as to offer his woman’s body to the man who gave him a vagina against his will.  But, in this film, we don’t see much of that struggle.

The idea that Vera is in shock, suffering PTSD seems very plausible given what he is going through and has been through along the way, including being kidnapped, starved, kept chained up like an animal and then emasculated, and I do not question the likely reality of such a reaction, but it doesn’t work for me in terms of a dramatic choice.

Similarly, when the doctor sends down a bunch of women’s cosmetics and a book on how to put on make-up, Vera sends them back. He seems perturbed, and we see his efforts to resist being feminized in mind as well as body here, and in a scene when he shreds a bunch of flowery dresses that have been left for him to wear, but otherwise we don’t see much more in terms of the doctor’s efforts or Vera’s resistance.  For much of the movie we see him sitting around reading (women’s fiction), watching television or else passively posing when he knows the doctor is watching him.

Vera breaks out of his feminine passivity, finally, when he decides to use his curvy new body to try and gain his freedom.  It is delicious and fascinating to see when Vera first tries to seduce the surgeon.  Vera becomes the aggressor, pushing his body against the doctor, following him when he tries to retreat, and much like a man insisting “I know that you want me.”  The doctor, we have seen, has been identifying with his creation, even mirroring Vera’s feminine poses: 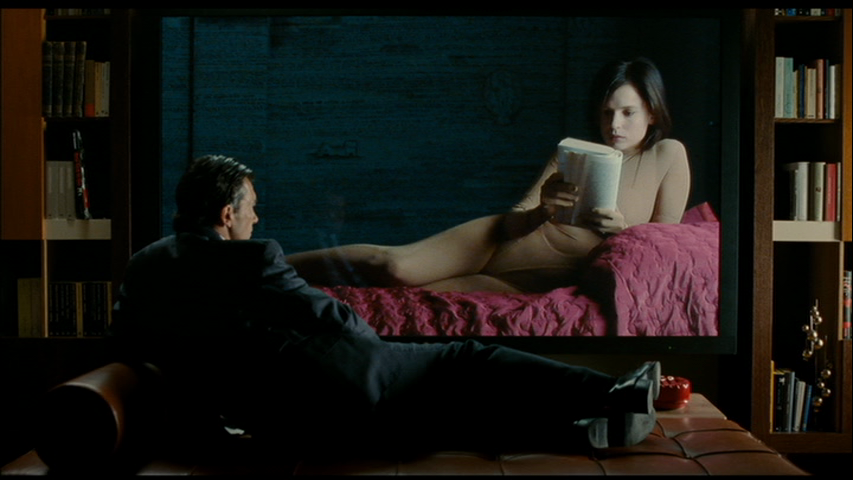 But, and here is another artistic choice that disappoints:  Almodovar is afflicted with the contemporary belief that being artsy and literature means being vague, suggestive and creating works which are indeterminate.  The doctor’s mirroring is never really explored, much like Vera’s own move to seek to seduce him.  We are also kept in the dark about Vera’s motives.  Is he suffering from Stockholm Syndrome?  Has he fallen in love with his captor?   Or, is he now forced to use his feminine whiles and pretty face to get what he wants?

And what does he want?  Does he want his freedom?  Or, has he resigned himself to a woman’s life, and does he truly wish to live with the doctor as the other man’s wife? Does he want revenge?

And why put him in that ugly flesh-toned body sock, which may be the single least appealing item of clothing I have ever seen in any movie, including Joe Dirt?

I am all for sophisticated storytelling, but I would prefer to be even more confused, for the psychological complexity to be more deeply and fully explored.  It is very possible that both Vera and the doctor are conflicted, that they don’t know what they want, which is fine, but it is all glossed over, hinted at, and what’s left is a study in characters who are often cold, cruel and detached, who we are the viewers never get to really know and I, at least, didn’t ultimately care about all that much, which reduced the impact of even the moving final scene where Vera, now a woman, goes back and sees his mother for the first time.

Lastly, the story, like too much modern art film, hides safely in a world of grey.   Unlike much forced femme literature, the character of Vincent/Vera may or may not have had it coming.  He had sex with the doctor’s daughter, but it seemed consensual, and she only panicked at the last minute and tried to stop him after he was already in the act.   Often, forced femme stories deal with people who we as readers feel deserve what they get, and in Mygale the character is much less blurry in terms of his immorality.

In The Skin I Live In, the character may be innocent. Did he rape her?   He is portrayed as a basically decent kid before the incident, and by making him possibly innocent, the story lacks the kind of he deserves it quality that for me makes forced femme stories palatable.

To watch someone who probably didn’t have it coming being tortured and cut apart made me feel a little sick.   Now, Almodovar may have been going for that, I can’t say.

But what I can say is that I didn’t love the experience.

Rent or Buy It On Amazon

2 thoughts on “The Skin I Live In: Off The Mark (Spoilers!)”