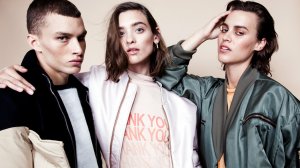 I dream a dream of fashion anarchy, where people just wear what they want depending on who they feel they are on a given day or a given time of life.

And unisex clothing is not the answer.

Today’s New York Times features an article on the blurring of gender lines in fashion, with more and more designers opting for unisex clothing lines in which all their items are sold without any male/female labeling or identification. The clothes are awesome, and I support and applaud anyone who likes them and wears them, but I long for a more expressive world.

And what would that more expressive world look like?  That world, to me, would include fashions that fell everywhere from the extremely feminine to the extremely butch, and in my world people could wear whatever they felt like on any given day in any given season.  If a woman wanted to dress in “dude” clothes, she could, or unisex, or if she felt like getting all dolled up and showing off all her curves, that would be fine, too on any given day for any reason.  Ditto a man.

What I see in the pictures that accompany the articles are a bunch of gorgeous, rail-thin models with androgynous features, all hints of curves or angularity hidden beneath loose, baggy clothes. The designer Kimberly Wesson, who wears her own unisex fashions, complains that her friends plead with her to wear a “sequined skirt” or to dress like “Joan from Madmen.”  Her designs are great, and she should wear the hell out of them, but why create a new set of restrictions in which unisex is an iron-bound fashion rule just as a inflexible and rigid a code as any other?  In which people are hiding their bodies?  In the name of being gender free, do we have to become gender-less?

I realize my vision for an expressive world that opens up opportunities for expression and includes more rather than less options may well be an unrealistic fantasy.  Even in my own writing I have yet to write a story where it exists, though maybe I will now that I think about it.  I think any trend that involves blurring of gender lines is a good trend.  The article asserts that more and more members of the younger generation are comfortable with gender free clothing, though, predictably, this trend is more female-centric as it has long been more acceptable for women to adopt men’s fashion that the other way around.

The changes are good, and I applaud all of the designers moving away from rigid notions of male and female clothing, but I want more.

I dream a dream of fashion anarchy, where people just wear what they want depending on who they feel they are on a given day or a given time of life.  I want total freedom all the time for everyone.