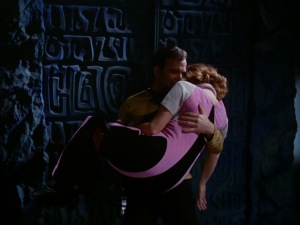 The last lines of the last episode of the original Star Trek television series, and the first body swap story I remember ever seeing.  I was young– pre-teens, and I loved Star Trek, which was in constant re-runs on the UHF stations that broadcast out of Detroit back in the 1970s.

Growing up without a father, I had chosen Captain James T. Kirk as a hero and role model, so it was a strange and fascinating thing to see this episode in which he found himself trapped in the body of a woman.  My hero?  my role model?  A girl?  Yet, early in the episode, the characters who put Kirk in that body still refer to him as a he, despite the female form.

Aha!  That excited and interested me.  He was still a he, even though he was a girl?

The episode raised a lot of questions that I had never really consider, particularly in the court martial scenes. “You claim to be Captain Kirk?”  Lester asks, smirking and laughing at the red-haired woman wearing some kind of weird mod pantsuit.

“No,”  Kirk answers.  “I claim that whatever makes James Kirk a unique entity is being held in this body.”    What I heard him saying, though I didn’t have the words, was, “I am not my body.  The thing that makes me who I am is not this woman’s shape.”

The iconic nature of the role reversal that lit up my young mind.  Kirk, in the woman’s body, being carried around effortlessly by the man, like the women on the covers of my mother’s romance novels.  Kirk on his knees after being physically over-powered by his former male body.  Kirk, reaching for and grabbing Spock’s hand.  Placed in a woman’s body, Kirk was forced into a woman’s traditional role, pleading with the men in his life to rescue him.  In the end, of course, he saves himself through action, as men are supposed to do, but it is not as a man that James Kirk saved himself; it was as a woman, and that to me seemed to suggest that biology was not, as some would suggest, destiny.

Though I believe it may have been an attempt at a feminist statement, the episode has since been condemned for being sexist, retrograde.  The woman in Kirk’s body is prone to fits of hysteria, loves to file her nails and proves incapable of commanding a star ship.  At one point when she complains about the lack of opportunity for women,Kirk agrees with her that life is unfair for women, but with the kind of dismissive “Whaddya gonna do?”  attitude that is still far too prevalent.   The last lines of the episode are specific.   She could have lived a life as rich as any woman.  Not, clearly, as rich as any man, which was the real issue.

Still, I feel it holds up well both as an exploration of the cost of gender bias as well as a exploration of a body swapping gender reversal.  In the end, Lester’s ultimate defeat and punishment is to be trapped in a traditional gender role– to be dependent on a man for her care and protection.  What could be a more powerful statement against the notion of domestic bliss as the be all and end all for women than the image of a woman, broken and weeping with despair at the thought of being stuck marrying a doctor who wants her to just stop striving and be his wife?  And that was back when television shows portrayed that every woman on Earth creamed her jeans at the thought of marrying a doctor.