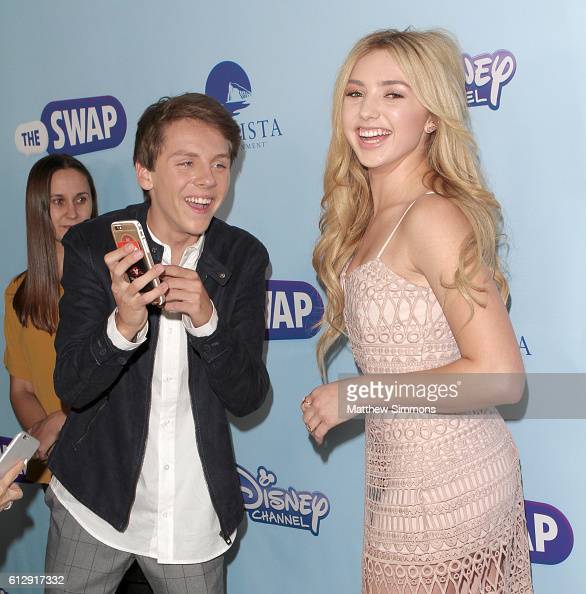 In this corner, Meghan Shull’s young adult novel, The Swap.  In that corner, Disney Channel’s movie length adaptation.  Which will emerge as the true champion?  Ring the bell and let the battle begin.

Both the book and the film are PG, and both of them artfully dodge anything that a family or young person might find creepy or weird.  For example, in the book Jack, in Ellie’s body, refuses to undress for his physical because he knows it would be wrong for a boy to see a girl naked.  In the movie, when Ellie’s mother induces him to take a bubble bath, he wears a bathing suit.

The story focuses mainly on the characters and their relationships.  Jack has a strict, military father and three rough-housing older brothers.  The father is cold and distant, and he pushed his sons to extreme physical fitness and competitiveness.   When Ellie finds herself suddenly in his body and life, she has to adjust to being yelled at, wrestled with by half-naked boys (all of whom she finds very attractive, something she must hide since she is in the body of a boy and a younger brother.)  She also has to experience other embarrassing moments, like waking up with morning wood.  We learn that one reason for this testosterone driven dude life is that his mother died a year ago.

Jack, on the other hand, finds himself living a life of luxury and ease as a girl.  He has a big, fluffy, comfortable bed, a loving mom who is full of hugs, encouragement and understanding, and even makes pancakes for him just about ever morning.  Jack, though, shies away from this mother’s attempts to be close, and his further horrified when both his mother and his doctor want to talk to him about his impending menstrual cycles and graduation into womanhood.  In addition, he now finds himself mystified by the female politics of the all-girl world he finds himself in, and as a shy boy who never could talk to girls, it is an extra terrible struggle as he finds himself a girl in a girl’s world.  In the book, remember, Jack is now a 12-year old girl, so the all girl social  makes sense.  It is a little harder to believe in the Disney movie, where they are both sophomores in high-school, but this is a Disney Movie, where even adults never do more than offer each other innocent little pecks.

The movie did a better job creating suspense. In the book, the characters believe they just have to make it through the weekend, so that can find the nurse that switched their bodies and get turned back.  The movie made a better choice; the characters have a limited amount of time to earn the right to return to their own bodies, or they will be trapped forever in their new lives.  And how can they earn the right to get their own bodies back?  Well, Jack has to perform rhythmic gymnastics, wearing full make-up, body glitter and tiny little outfit, gracefully dancing around while twirling a ribbon.  Ellie has to dominate other boys in hockey, though she finds a way to use some of her gymnastics skills along the way.

In the end, and stop now to avoid the ultimate spoilers, the book just stops.  The characters do what they need to do, and then they just pop back into their bodies.  The whole thing about the nurse and getting through the weekend vanishes.  In the movie, we get the traditional false ending.  The characters fulfill their quests, and then… they don’t change back.  They think they have failed, and they both seem resigned to their new lives.  Ellie turns to Jack as he stands there in his gymnastics costume, and says, “I am sorry Ellie.”  He looks at her in her hockey gear and says, “I am sorry, too, Jack.”   I would have liked for more of this section of the film, where the two characters are facing their futures and boy and girl, but it turns out they really needed to deal with their unresolved parental issues.   Jack opens up to “his” mom, and they have an emotional moment together, while Ellie stands up to “her” father– and then they are restored.

In the end– sorry– do both.  Read the book.  See the movie.  Both argue for a more genderfluid sense of identity as Jack in some ways makes a better girl than Ellie, and Ellie makes a better guy. Meanwhile, both of them learn that they can indulge in activities that defy norms and actually not only enjoy them but get stronger as Jack learns to enjoy bubble baths, for example, and Ellie starts to thrive in bro-culture.

One regret for me comes from the casting of the movie.  Peyton List is taller and actually looks more muscular and athletic than the scrawny actor who plays Jack.  List looks like she lifts weights, and has a bigger bicep bulge when she challenges another girl to a fight than we see from Jack, who in the book is very muscular — it would have been interesting for me to see Jack react to the realization that as a girl he actually has more of some of the things guys want–  height, muscle– but  maybe I will just have to write that book myself!

2 thoughts on “The Swap Versus The Swap (Spoilers)”