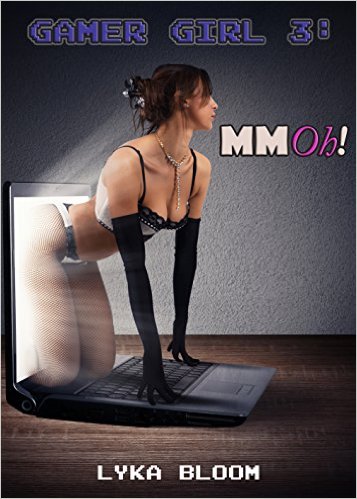 Hey, readers!  Today I am extremely happy to share with you my interview with one of my favorite TG writers, Lyka Bloom!

1. What are your top three TG experiences in terms of books, films, videos, songs?

It’s hard to remember now where the interest came from.  I was always fascinated by mental and physical manipulation of one form or another.  There’s a Clive Barker story called The Madonna Pool that was one of the first memories I have of reading gender transformation and really responding to it.  For some reason, Saturday morning cartoons seemed to be littered with gender change storylines, and I always found those viscerally attractive to me.  I know I am being vague, but it’s hard to point to a single thing, or even three things, that were formative.  Lately, I can point to certain books others have done.  I loved Pinsedo by Tom Tame, and I thought Allmyth was really wonderful, too.

I think like science fiction at its best, the TG world allows you to do morality plays and also examine a real issue beneath the obvious real-world TG issues.  You can do crime-and-punishment stories in a way that has a sexy edge, and who doesn’t like a little sexiness in their lives?

Also, the idea of becoming something that you were not before appeals to me.  I think there’s a long-standing taboo regarding men expressing femininity, so I like to play with those ideas.  For some of my characters, the idea is repulsive while others hurtle towards it.  Sometimes it is a punishment, but that leads to the idea of how you can punish someone who is no longer the person they were.  I think my work tends to be a softer branch of the genre, where I introduce some optimism amid the changing bodies and minds.

We live in a time now when gender fluidity is more acceptable, and playing with the variations of the masculine and feminine, whether that’s shemale or futa or what have you, is fun as a writer.  You can explore the notion of attraction – what’s sexy now?  Is it the buxom woman or the slender man, is it the muscular, tall woman or the man with long hair and a hint of makeup?   Honestly, one of the biggest challenges is keeping up with how culture is changing.  As much bigotry and sexism exists, there is a surprising acceptance and tolerance for LGBT issues, and that’s really refreshing to see.  I think more people are open to the kinds of work I do and other authors in the genre do.  It’s come out of the closet, so to speak.

I really like the magical and mythological TG fiction.  I’ve always been attracted to the discordance in the male mind in the feminine body and so forth, so much of my fiction has to do with the man being conditioned into womanhood.  There’s an element of reluctance to it, but I don’t generally do humiliation in the stories, which is a theme I see running through a lot of the TG fiction.  I suppose I’m enough of a romantic to want a happy ending for most of my characters.  Even if they are fundamentally changed by the end of the story, the characters tend to be left happy.

I’m intrigued by the humiliation/sissy stories, but I’ve never been able to successfully write one.  Halfway through, I end up finding a way to make the characters find the upside in things. Sometimes I wish I was crueler, because some of that work is fantastic!  Ann Michelle, in particular, I enjoy for her feminization stories, and Kylie Gable does fantastic stuff there, too.

My mainstream influences were Stephen King and Clive Barker, because I loved horror novels for most of my childhood.  I think King, in particular, has an eye for subtle detail that really grounds the stories of the fantastic in reality, and I still love that.  I try to do a hint of that in my work, but only a reader can say if I have any success in that arena.

I’ve written in one form or another for years and years, but I think the moment when I was ready to publish my work came when I was reading some of the stories available in this genre.  Yes, I’m a fan, too.  Without being overly critical, it really was a case of reading something and thinking I could do better, or at least no worse.  And then I read some truly impressive pieces and I realized that, yes, there is an element of the erotic in these stories, but there’s also real work being done to make interesting characters and to explore the nature of gender identity and sexual identity.  I put out a couple of stories to see if anyone was interested and they did quite well.  That really gave me the confidence to start producing more, and to play with expectations a little, too.  While the vast majority of my work is in the TG realm, I step outside of it to do some other things, including some horror erotica that is definitely influenced by my early reading.

What has surprised me most about starting and having been writing in this genre for several years now is the loyalty of the readers and the creativity that they express, too.  I started a Patreon thing so that readers could contribute and, in exchange, I would develop as try based around their ideas.  So, stories like the “Muffy the Demon Slayer” tale and “Casino of Change” are ideas that came from readers (I hesitate to call them fans, it sounds immodest to me) who were kind enough to offer a contribution in exchange for entrusting me with a story they would like to see.  It’s really fired my imagination, too, and I think I’m doing more diverse things now than I’ve ever done.

I get the occasional email from a reader that will tell me how much they enjoyed a particular story, and that’s an unbelievable thrill!  I think the nature of doing erotica is that most readers tend to feel secretive about their reading experiences;  When someone reaches out, it’s very flattering, because it implies that that person is coming out of the shadows a bit to say that a particular story pleased them.  It’s very satisfying.

I’ve also had authors tell me that they were inspired to do their own stories after reading mine.  I try to be as much of a force of positivity as I can be, and I encourage every reader to write their own fantasies at one time or another, even if they never publish it.  The TG community has been too long dismissed, and knowing that there is this community of readers who find TG fantasy fiction enjoyable makes all of us less alone.

I try to do about a story a week.  Left to my own devices, I can be terribly lazy so I try to keep a consistent schedule to stay productive, otherwise I’d only do a story every couple of months.

The next four or five will be a continuation of the Corporate Takeover series, the conclusion to the Stable Games pony-girl stories, a new Pink Institute story and a sequel to Muffy the Demon Slayer, in no particular order.  Plus, I do a free short-short every month on the website (LykaBloom.com to be shameless for a moment).  And then, who knows?  But something spicy, I’m sure!